The Tech Landscape of Newspaper Websites 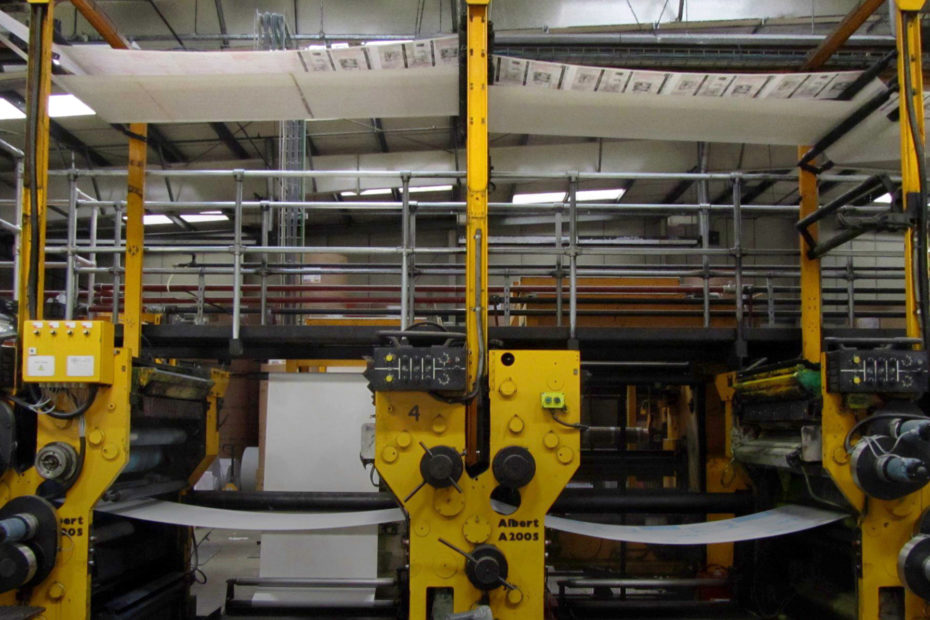 When The Washington Post launched a homepage redesign in August 2015, it was the culmination of years of work — not as one large redesign, but as part of an iterative approach that began with the article template. ProPublica and The New York Times recently shared that they employ user research when approaching their website enhancements.

However, these processes, while considered best practices, are luxuries in the broader journalism industry. Broadly, with many tools available, newspapers focus on advertising more than usability.

As the internet increasingly becomes the primary medium for journalism, it’s important for the industry to understand the areas in which it can improve.

Newspaper web sites are more likely than Software as a Service (SaaS) companies to use analytics to better understand their audience – but are less likely to take advantage of analytics which could greatly expand the user experience and their technological abilities. Newspapers often use a content management system built primarily for news. They don’t often utilize web fonts, but are likely to utilize a variety of third-party tools for content. Video technologies as well as a plethora of advertising tools are found more frequently among newspapers.

As the internet increasingly becomes the primary medium for journalism, it’s important for the industry to understand the areas in which it can improve.

Using lists provided by usnpl.com, I discovered 3,769 unique newspaper websites. For the purpose of this landscape analysis, I included all sites regardless of size.

In order to determine web-industry standards, I researched SaaS companies listed on AngelList. Web technologies are at the core of these companies and; therefore, the construction of their public-facing websites is often more well-informed.

The initial AngelList query returned 6,887 companies. But anyone can create a company profile on AngelList. To qualify the companies, the analysis was limited to companies listing more than ten employees — leaving 973 total SaaS websites.

The technical capabilities of these sites were assessed using the BuiltWith API. This service assesses signals to determine whether a technology or service is present on a website.

TownNews was the leading CMS for newspaper websites. The BuiltWith API could only identify a CMS in 1,620 websites. Of these, TownNews was found to power 603 sites (37.2%). However, TownNews is not found among the top 20 systems used across the internet, nor is it found running any of the SaaS websites. As a CMS built for newspapers, this is no surprise.

Roxen, a CMS built in Sweden, is running 19 websites owned by Shaw Media in Northern Illinois. Another European CMS, NewsGate, powers the Chicago Tribune, but could not be identified by BuiltWith. Additionally, many newspapers have custom CMS solutions that could not be identified. The Washington Post, for example, uses WordPress for some blogs but the main site’s CMS, Arc, was built in-house.

SaaS companies use WordPress 80% of the time, but far fewer use Drupal — only 4%, compared to the 20.2% of newspapers. In addition, Squarespace is a more popular CMS for SaaS companies. Although Squarespace markets itself as a great platform for blogging, it has not been adopted by news outlets.

Analytical tools help developers and editors alike understand their users. By tracking behavior, testing, and monitoring, a team can optimize a site for better performance and a better experience.

Google Analytics is the leading analytical tool for the entire internet, and that’s no different for newspapers. Seventy-two percent use Google; a slightly lower rate than that of SaaS websites (80%).

Compared to these technology companies, certain categories of analytical tools are more popular among newspapers while others are nearly missing.

Newspapers are more likely to employ audience profiling tools. In fact, the second-most installed analytical tool is comScore, used by 40% of newspapers. Another popular tool is Quantcast (39%).Lotame, currently used by 1,280 newspapers, is poised to increase its market share after announcing a partnership with TownNews.com — the leading newspaper CMS.

Newspapers are less likely to use optimization tools, though. CrazyEgg is only on 64 newspaper websites, 1.6% of them compared to 10.7% of SaaS websites. Optimizely is used by 26 newspapers — 0.7% of newspapers, compared to 19% of SaaS.

In May 2015, mobile Google search traffic surpassed desktop in the U.S. for the first time. That’s just one factor signaling the importance of mobile users to a web audience.

When mobile devices first started connecting to the internet, companies often adapted by developing separate mobile websites. These days, it is far more common for websites to employ responsive design — a programming strategy that allows a site to adapt based on the width of the browser window. This is accomplished using a CSS technique called “media queries.”

Of the 3,769 newspaper sites analyzed, 1,997 (53%) were using one or more media queries, compared to 74.5% of SaaS companies. Nearly all these sites use the “max width” query, which is a best practice in a mobile-first design methodology.

Mobile browsers by default shrink a page’s content to fit the screen unless the page contains a viewport media tag with the appropriate settings. While 77% of SaaS websites included this tag, only 27% of newspaper websites did.

A static website is comprised of HTML and CSS. For added interactivity and enhanced user experience, JavaScript comes into play. While custom JavaScript can easily be written, programmers often release ‘libraries’ to consolidate many operations in one file, or to perform a complicated task. Websites can include these libraries to offer functionality to their users.

Across the internet, the most popular of these libraries is jQuery — it’s on 83% of SaaS websites and 74% of newspaper websites.

On average, newspapers use 7.7 JavaScript technologies. “Facebook for Websites” and the Facebook SDK are both among the top five libraries for newspapers. SWFObject is a small javascript code used for embedding Adobe Flash files and used by 46% of newspapers.

In compatibility tools, 26% user Modernizer and 23% use html5shiv. A variety of jQuery extensions are also used. jQuery UI (31%), jQuery Cookie (23.9%), and Lazy Load for JQuery (13.9%) were among the leaders. SaaS websites use the Form, Masonry, and Easing extensions more frequently.

In addition to JavaScript, there are a variety of web tools that can be embedded on a website to provide a variety of enhancements.

The first of these are web fonts, which allow greater design flexibility by providing non-standard font files to users. Google Fonts, a free web font provider, is the most popular of these and found on 36% of newspaper websites (1,343). Another popular provider is Typekit, but this was found on only 1.2% of newspapers. SaaS companies were more likely to use either Google or Typekit — at rates of 58% and 15%, respectively. Generally, only one of these is needed.

Newspapers utilize share buttons at a much greater rate; AddThis is used by 28% of newspaper and ShareThis by 6.3%. Specific social networks are also seen more frequently. A Facebook Like box was found on 23% of newspaper websites, and a Twitter timeline on 15%. Only 6.7% of SaaS companies use the Facebook Like box, showing either less reliance or less interest in social tools.

Some widgets uniquely used by newspapers (as opposed to SaaS companies) include Accuweather, Wishabi, SmugMug and Press Plus. Virtually any site with embeddable content could be considered a widget — including MailChimp and PollDaddy.

As newspapers scramble to enter the digital age, they often utilize video as a shortcut — for both advertising and content. Advertising platforms Videology/TidalTV (858) and TubeMogul (709) led all video players. Flowplayer (639), YouTube (477), Brightcove (270), and Kaltura (211) followed as broader video-playing technologies. Among SaaS companies, YouTube, Vimeo, and Wistia were the most common.

In total, 1,768 (46.9%) newspapers utilized at least one video technology identified by BuiltWith. Several had as many as six. Slightly fewer (37.5%) SaaS companies used video.

Analysis of these 3,769 newspaper web sites found 66,389 ad tool installations, an average of more than 17 per site. But the differences between newspapers are staggering.

The Houston Chronicle leads the pack with 91 identified advertising technologies. A total of 648 newspapers have over 50 services — with 232 unique services detected. However, on more than a third of these websites (1,379) BuiltWith found no ad technologies. Of the 538 SaaS websites with ad technologies installed, the analysis found an average of 6.5 of these services. Only two had more than 20.

The most utilized service is DoubleClick, Google’s service for targeted ad campaigns, found on 2,209 newspapers (59%). Google’s AdSense is the second most popular ad technology, with 1,934 newspapers (53%).

The most popular framework used throughout the Internet is PHP, and for newspapers it’s no different. According to BuiltWith data, 38% of all websites use PHP as their framework — this grows to 42% among newspapers and 52% among SaaS companies.

In addition, among newspapers, 14% use ASP.NET and 3% use Ruby on Rails.

Every website needs a server on which to run. Years ago, a company would have employed its own IT staff and host its own website, but with the advent of cloud hosting it is easier than ever to build and modify a custom, scalable server solution.

For leading SaaS companies, Amazon was by far their favorite host, with a 42% market share. Hosting for newspapers, however, is a much more diverse landscape. Amazon is only used by 6% of newspapers (216), but the service still comes in second among all hosts.

A CDN, or content delivery network, distributes Web traffic over a series of geographically convenient servers. The benefit of this is that users will access servers closer to them, minimizing the distance data would need to travel. It also lessens the load on the main server.

For regional publications, their reach had always been limited by the distance of delivery routes; but with the internet, the reach of news is only limited by connectivity. CDNs ensure the best user experience for these new audiences, but few regional articles reach a global audience. For example, a story on the city council’s new budget doesn’t hold much value to someone several time zones away. But, one odd news story and the power of social media can put a tremendous burden on a server. Without a CDN, a regional publication could experience a server outage.

This analysis found 48% of newspapers using the Akamai CDN for a portion of content; 24% had content on Amazon Cloudfront; and 14% utilized Rackspace. In the analysis, these services were not always mutually exclusive, so it is hard to determine what portion of newspapers were using a CDN for their entire website.

Additionally, some JavaScript tools and widgets can be loaded via their own CDN — 38% of newspapers are using Google AJAX Libraries API, which provides an variety of tools; 14% load jQuery through it’s official CDN.

The news industry can learn a lot from the broader web community. In addition to employing digital editors and social media managers, newsrooms could benefit much from user experience experts and skilled web designers.

With a focus on users, newspaper might streamline their advertising offerings, build better-performing websites, and reach a larger audience. Regardless of the revenue model — advertising or subscription — the news industry will always rely on consumers’ attention. For the majority of the industry, prioritizing the reader experience would go a long way toward quality of product.