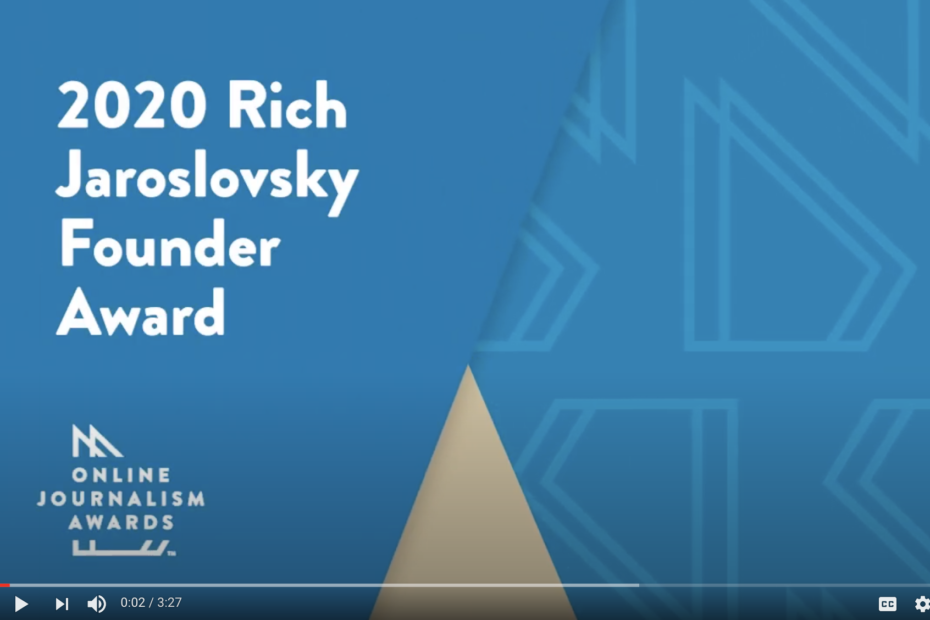 With the annual ONA conference going virtual, it was an additional heartbreak that the annual Online Journalism Awards would be virtual as well. A three-hour participatory program doesn’t necessary translate well online, so our program manager Hollie Schultz had her work cut out for her. But the result allowed us to highlight winners to curated audiences.

Again, our awards program was always participatory. We welcomed winners to a stage and encouraged them to make some remarks. In order to keep the suspense, we’d have to do award them live. But if they were pre-recorded, we’d be able to increase the production value. Ultimately, we decided to announce special award recipients with pre-recorded videos and categorical awards live.

If our goal with an awards program is to celebrate people, then it was clear that multiple people would need to be part of the presentation in order to provide a certain level of gravitas. We’d need to get video of their statements in a way that created as little work for our team as possible.

To manage the solicitation of videos, we turned to VideoAsk. Hollie was able to send video requests and manage responses. She provided prompts and set time limits. For these, we also told recipients they were to be recognized and they all willingly participated.

Production value was key for these announcements, so we knew we’d have to edit in Adobe Premiere. Since I’m not a motion graphics expert (and we had a time crunch), we turned to Adobe Stock for our graphics. Their library has all sorts of free and paid items. All we needed was a title intro and lower third graphics. Of course, we needed to customize these. Good templates will include settings to change color and typeface. We added a bit of our own flare (branding) as well.

The graphics alone wouldn’t convey excitement, so we wanted an audio track. A key decision was to have the audio play throughout the video, fading some while our subjects were talking. This signaled that the announcements would not be too long and also connected the clips to help the videos feel cohesive. Adobe Stock offers audio files, but we turned to Audio Jungle for a larger selection.

With 4-6 video submissions in tow, our graphics completed and a great audio track, we were set to share this with the world.

Setting Up a Premier and Walking Away

The best part about pre-recorded videos, in my opinion, was that there was no stress in “going live.” We used YouTube’s premiere feature to set a debut time before promoting it. Users could then sign up for a reminder and join at the appropriate time, participating in the YouTube chat.

Afterward, the video is available on-demand as a regular YouTube video.

Below is the announcement of the ONA Founder Award, the first of three special award videos the team produced.